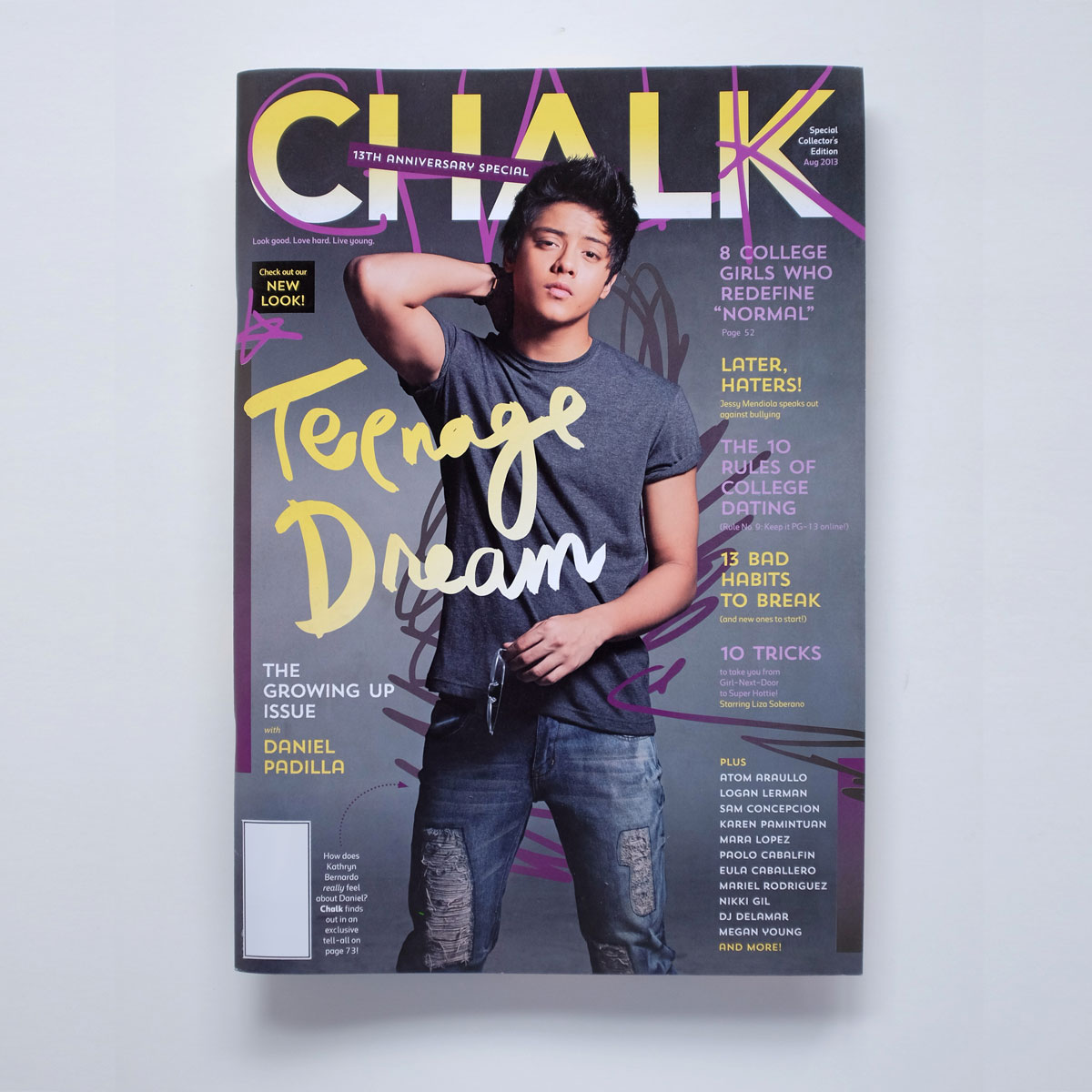 The Growing Up Issue with Daniel Padilla 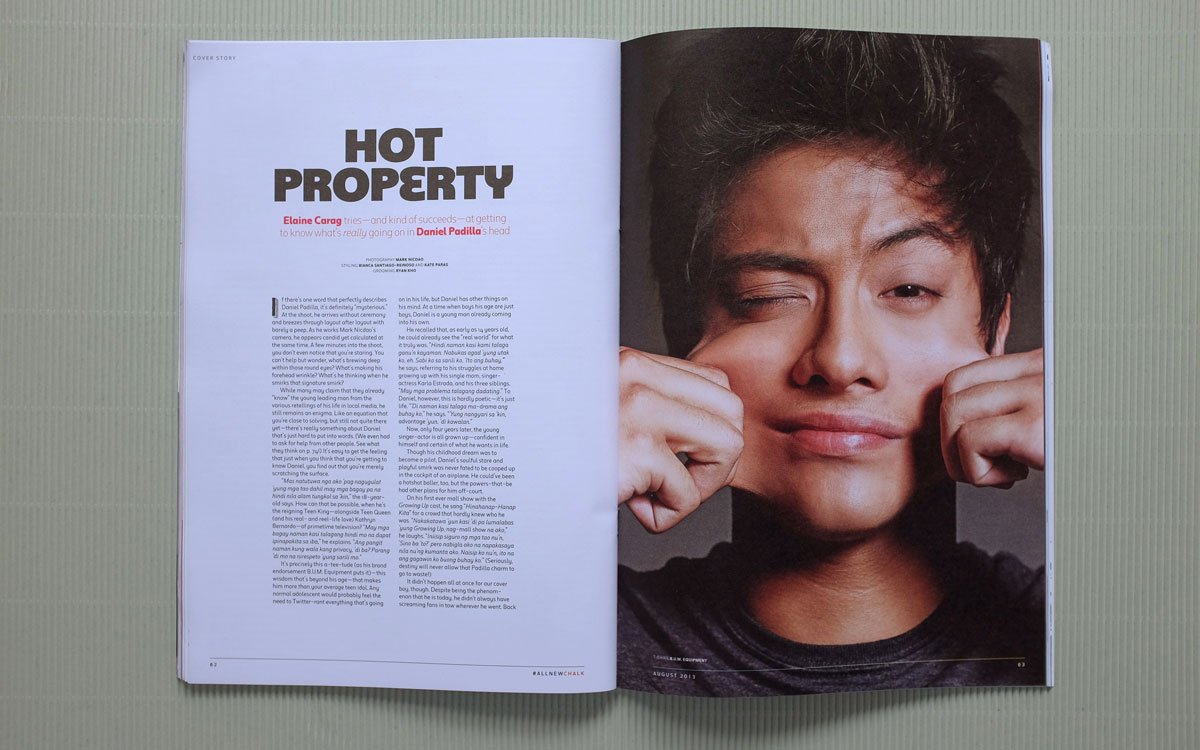 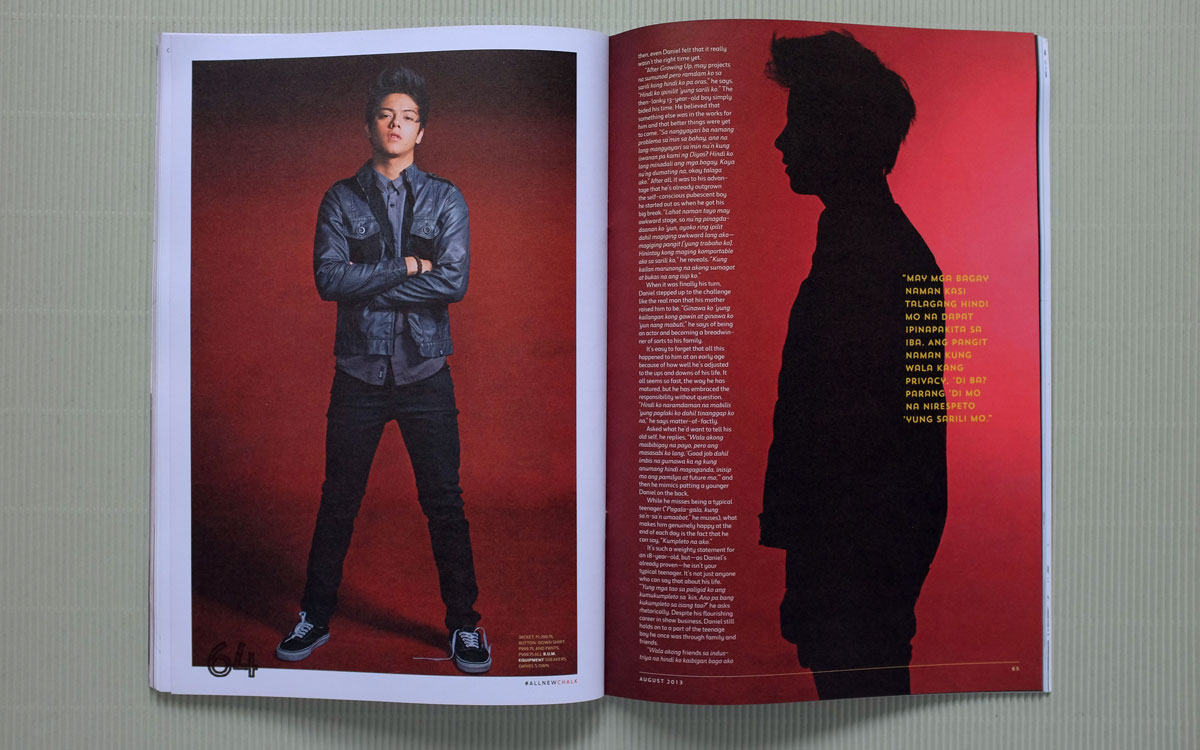 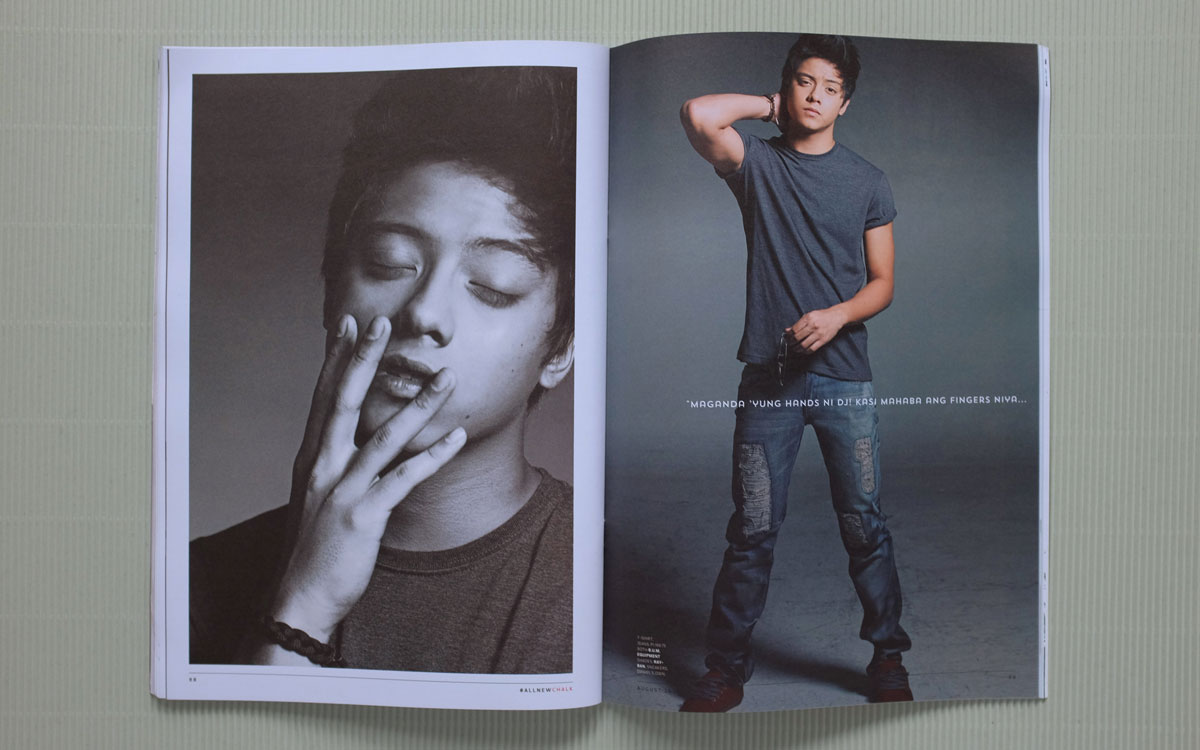 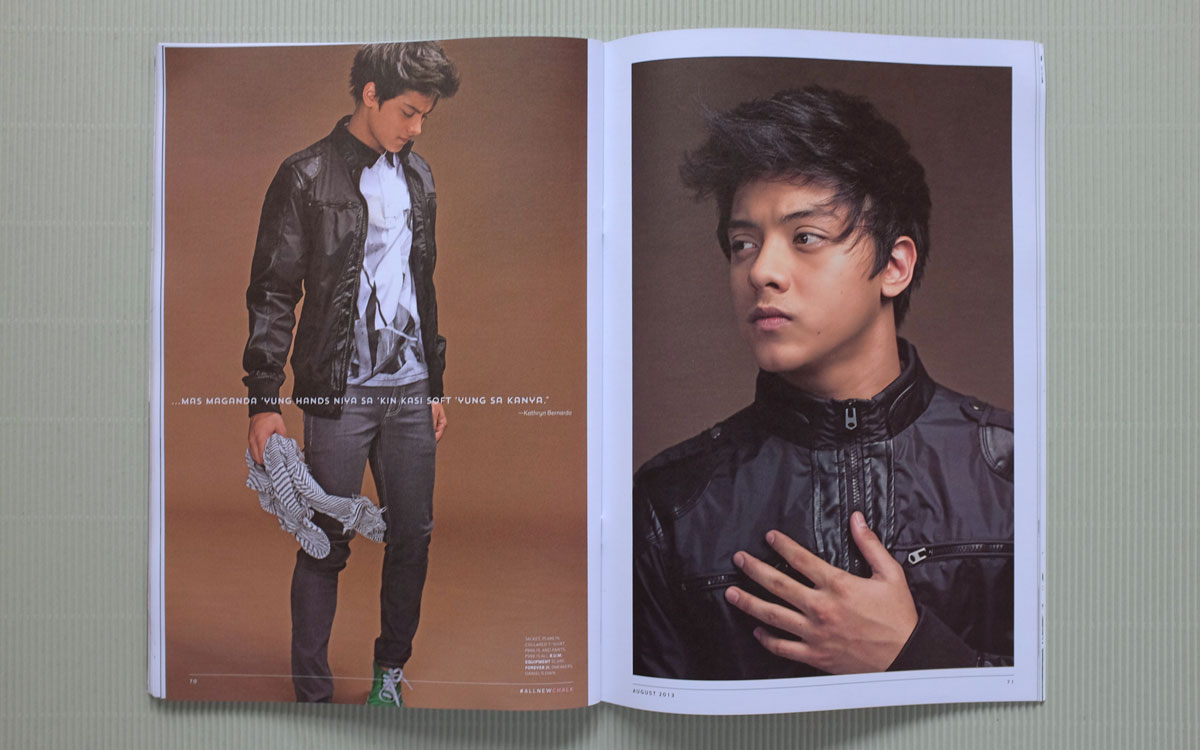 Chalk's 13th anniversary issue was also the first of the redesign which I helmed. It was the year that Chalk literally became a teenager, and appropriately enough, the issue's theme was “Growing Up.” We were fortunate to have access to someone who encapsulates what it's like to grow up in the public eye: Daniel Padilla, teen sensation, scion of showbiz family royalty and one half of the massively popular Kathniel love team. Despite his ubiquity, Daniel, as we found out, is not exactly the attention-seeker type. (“May mga bagay naman kasi talagang hindi mo na dapat ipinapakita sa iba,” he told Chalk.) It was this laid-back and private attitude that we aimed to capture for the cover story. As a celebrity, he was transitioning, and for the anniversary issue we hoped to capture a different and less-publicized side of Daniel.

Dramatic shadows were key in creating a brooding atmosphere. Hardly a smile was to be found in the photographs; we instead focused on pensive expressions, in contrast to his popular smiling-matinee-idol image. The clothes were more grunge-rock in style and very laid-back; shoelaces were left untied, a scarf unworn, hair tousled. We even included his guitar in the photos (he plays in a band). The overall effect is cooler, more serious, and more him.

The approach: Dealing with stardom. Despite his immense popularity, Daniel chooses to remain private, in a way oblivious to the stardom, which doesn't seem to get into his head. We play with these ideas in the photo shoot. Mark captured great images of Daniel playing with his own face, literally toying with the moneymaker, and I thought it would be a meaningful and somewhat irreverent opener for his story—not a beauty shot, but one that pokes fun at all the other beauty shots that are the currency of his job. In another spread, a silhouette photo perfectly represented both the air of mystery that Daniel's fans love, and the privacy that he maintains.

As part of Chalk's redesign, I made it a point to maximize the magazine's large size to display full-page imagery—tactile on matte paper and swoon-worthy for fans. A special collector's issue, the 13th anniversary special contained a 16-page story on Daniel, including an article by his sweetheart Kathryn Bernardo.∎ 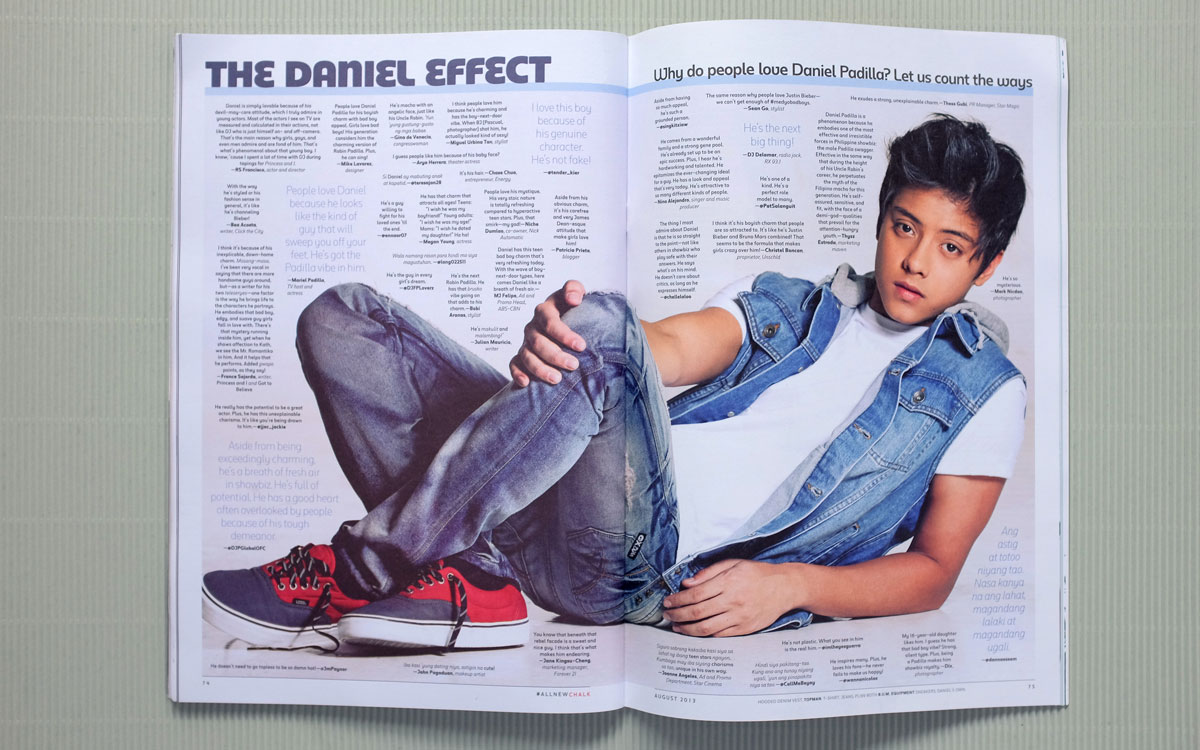 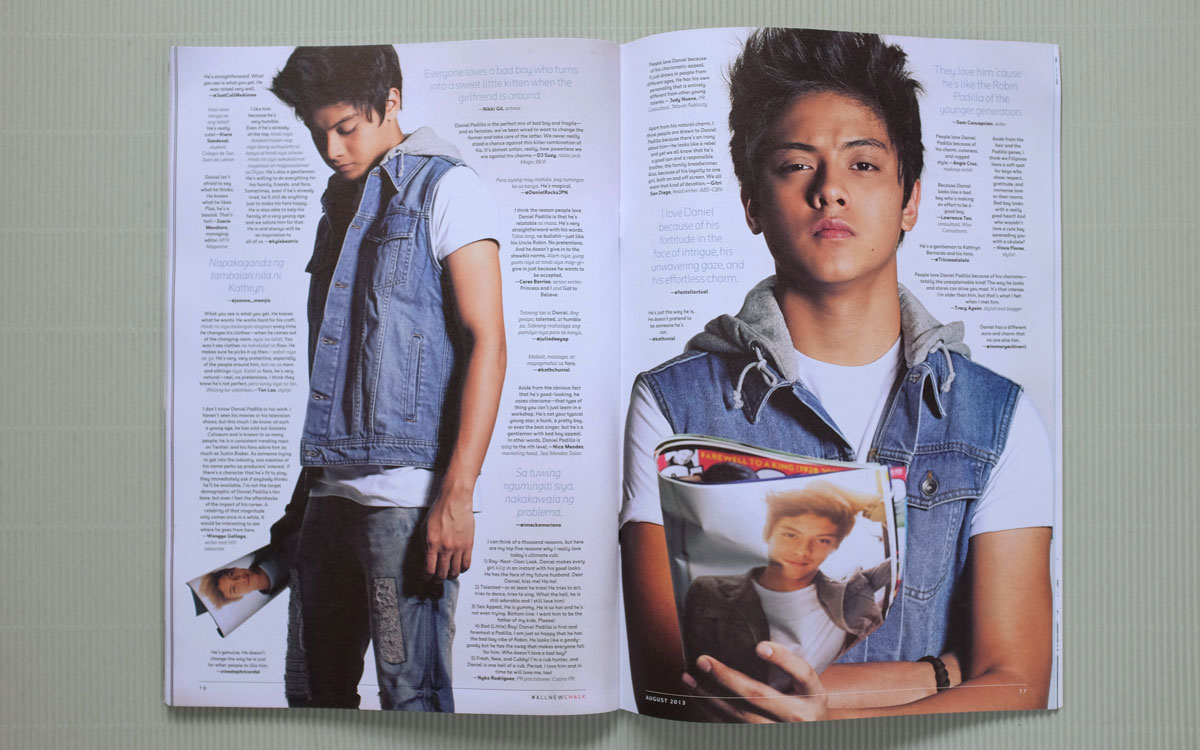